Naples welcomes visitors with an endless array of cultural sites to explore and experiences to savor. If you don't know where to begin, here's our insider's list of top 10 things to see and do in Naples, perfect for first-time visitors or those on a return trip who want to take a deeper dive into this fascinating city.

1. Take in the View of Spaccanapoli from Castel Sant'Elmo 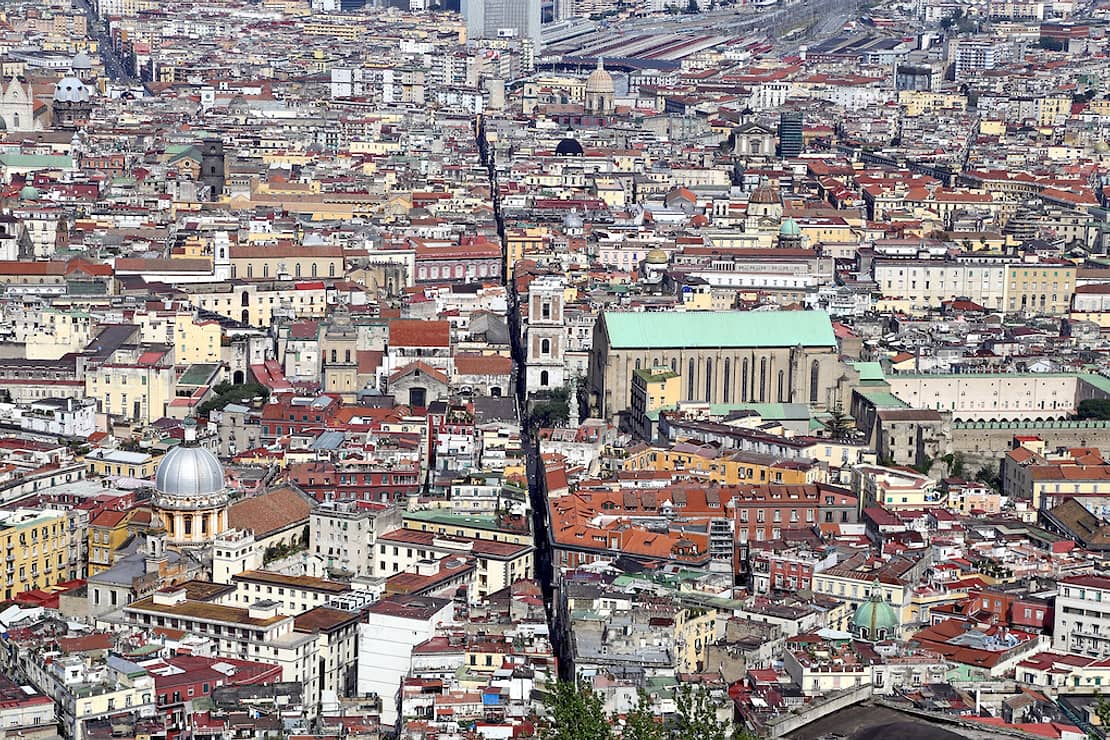 Admire the city of Naples from above by climbing up one of its most scenic hilltops overlooking the downtown and sea where you can snap dazzling photos of La Bella Napoli!

From the ramparts atop Castel Sant'Elmo on the Vomero hill, unparalleled views across the entire city of Naples await. Take in the jumble of rooftops in the historic center and sparkling waters in the Bay of Naples beyond, but be sure to notice the straight line of Spaccanapoli, a long thoroughfare that slices directly through the "centro storico" and is one of the most characteristic streets in the entire city.

In addition to breathtaking views, the castle offers its own delights. Take time to explore inside and out, and visit the Museo Napoli Novecento and other temporary exhibitions often housed inside the castle's halls.

Spaccanapoli is one of three “decumani”, or historic north-south roads that cut through the heart of Naples and date from the Ancient Greeks. From the heights of Castel Sant'Elmo, you can see the entire length of Spaccanapoli and admire how the ancients were able to build a perfectly straight road that divides the city in two, thus its name which means "splitting Naples".

2. Hop on a Boat Tour along the Coast 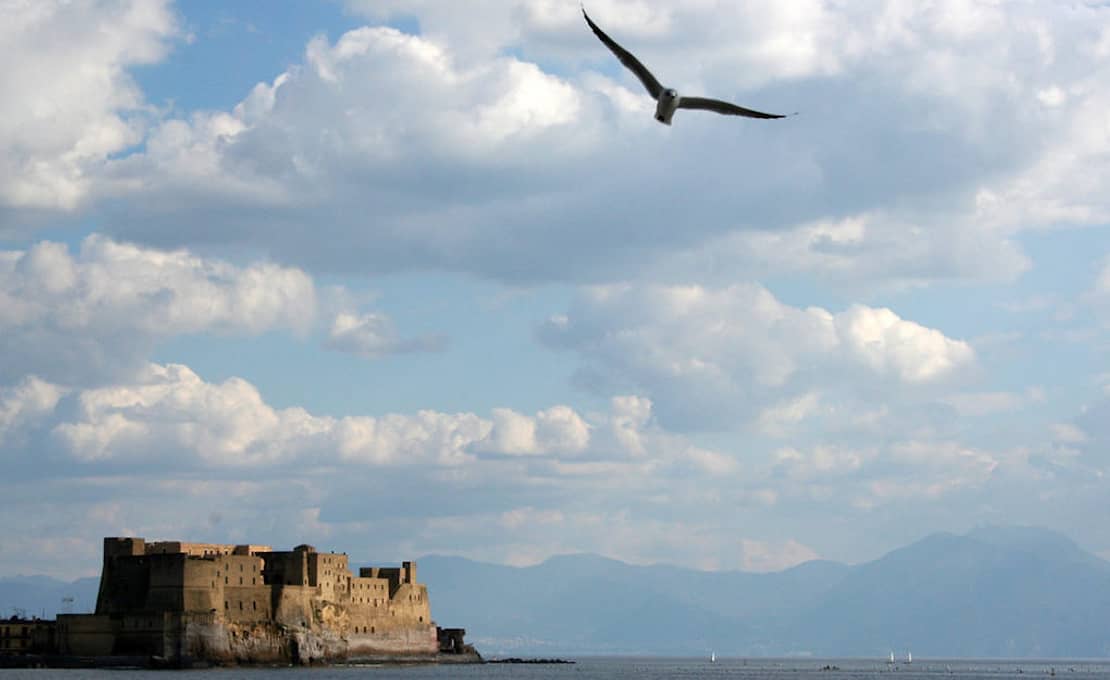 Naples wouldn't be Naples without the sea. This city and its residents have lived in symbiosis with the Mediterranean since humans first settled on the Bay of Naples, and to fully understand Naples and Neapolitans, you must take in the coastline from the water. Join a boat tour along the coastline to admire views of the city from the unique and dazzling vantage point of the bay, and enjoy the side benefit of a respite from the city's traffic and crowds.

As you leisurely skirt the coastline along Naples (perhaps while sipping a cocktail on board), you'll be able to admire a number of important buildings and landmarks, learn about the history and lore of the city, and relax far from the bustle of downtown. Tours generally sail by the islet of Megaride and Castel dell'Ovo, Palazzo Donn'Anna, and the Marechiaro "window". Regardless of the itinerary, we can guarantee that a boat tour will be one of the highlights of your visit to Naples!

Book a boat tour of Naples

3. Discover the Mysteries of the Historic Center 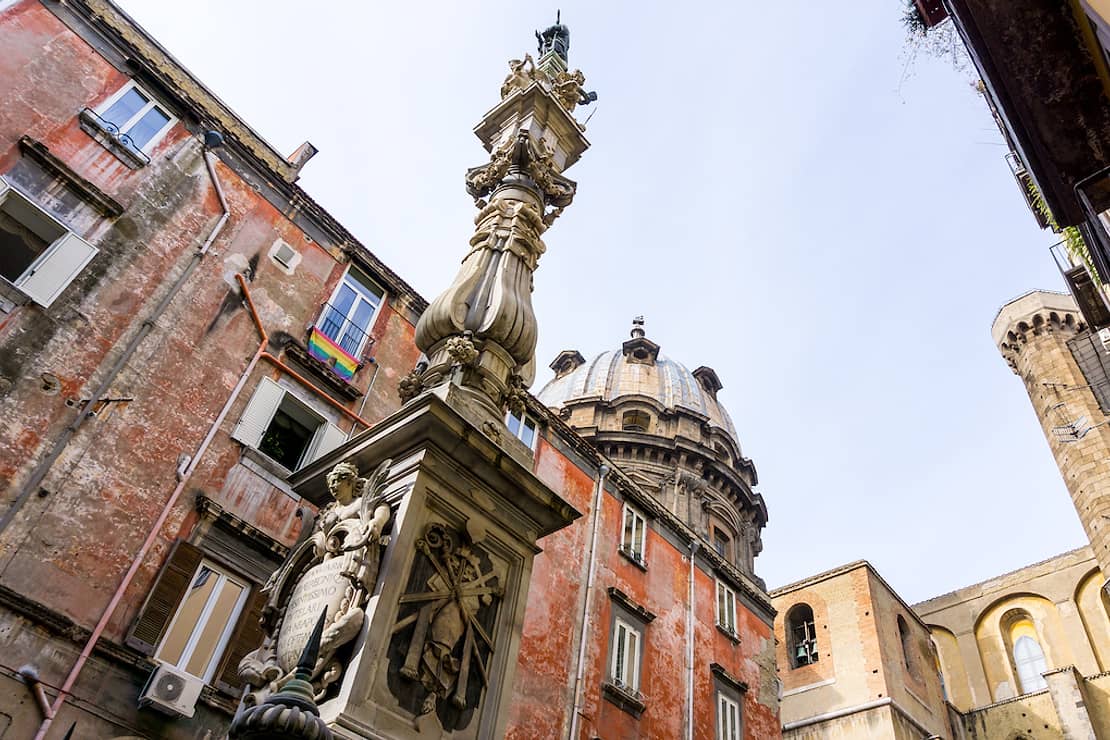 Neapolitan history is rich in legends, traditions, and superstitions...almost all the storied palaces that crowd the historic center are home to historic mysteries and supernatural legends, or at the very least boast resident ghosts or “spirits which haunt the halls”.

A guided walking tour is doubtless the best way to learn about the mysteries and legends of Naples' historic center and delve into the most important and beloved folk stories and characters that populate local lore, including the impish “munaciello”, a spirit that haunts many Neapolitan homes and delights in hiding household objects just to make them reappear in the most surprising and unexpected places. 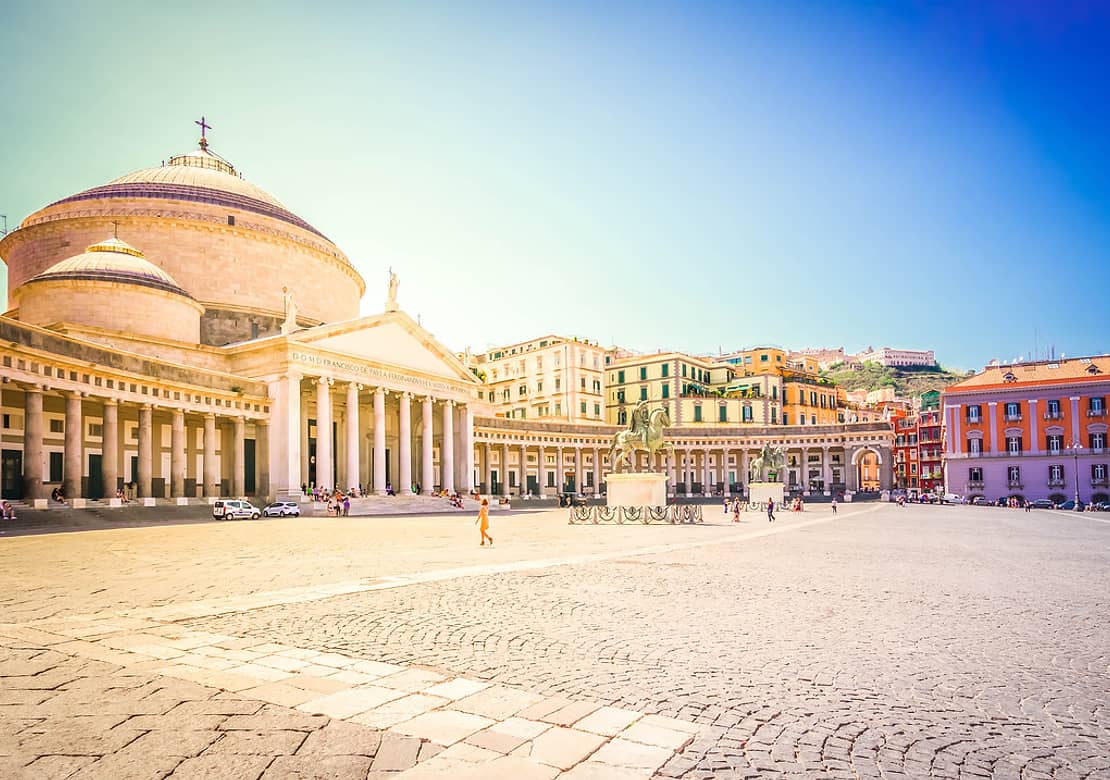 After being restored in the 1990s, Piazza Plebiscito became once again the "drawing room of Naples", beloved for its sweeping space, elegant architecture, central location, and important monuments that call it home, including the Royal Palace and Basilica di San Francesco di Paola, one of the most popular locations for local wedding ceremonies.

Do as the locals do in Piazza Plebiscito: stand in the center of the square with your back to the Royal Palace and close your eyes. Spin around slowly a few times and then, keeping your eyes closed, try to walk across the square to the colonnade on the opposite side by passing between the two equestrian statues in the center. It seems like it would be easy, but you'll be surprised how hard it is!

Piazza del Plebiscito is the perfect spot to take a break from sightseeing. Grab a table at one of the historic coffee houses overlooking the square and enjoy an espresso or aperitivo while people watching...a highlight of our list of top ten things to in Naples and one you can repeat as many times as you like during your visit!

5. Get to Know the “Capuzzelle” 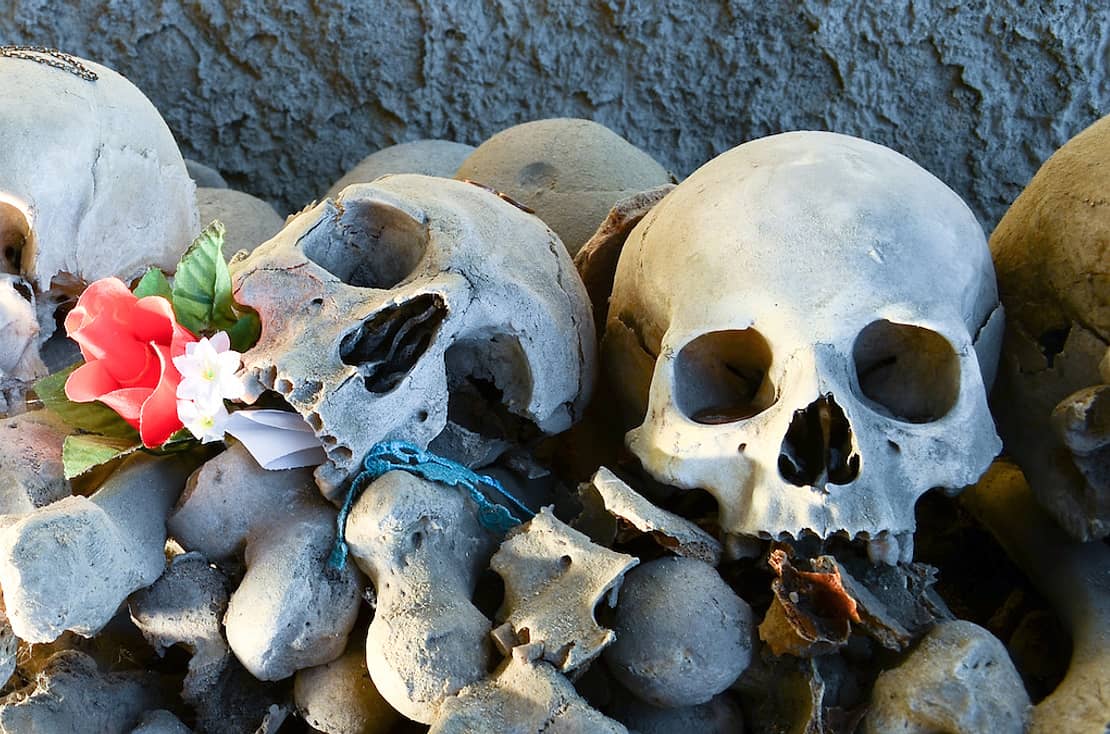 You may be surprised to learn that one of the top ten things to do in Naples is a journey, ahem, beyond the veil. One of the most important aspects of Neapolitan folklore and culture is the cult of the dead. To fully understand the importance of the link between the living and the dead in Naples, we suggest two truly unforgettable experiences: a tour of the Fontanelle Cemetery in the Rione Sanità district and a stop at the Church of Santa Maria delle Anime del Purgatorio ad Arco that sits along the central Via dei Tribunali.

Souls of the dead who are caught in Purgatory, especially those who are poor or unlucky, are affectionately known as “anime pezzentelle”, or "beggar souls", to Neapolitans. Locals would once "adopt" a specific skull in the city's ossuary, caring for it in exchange for favors, protection, and miracles; this tradition is now prohibited by the Vatican's ecclesiastic court.

If you want to learn more about this important local tradition that straddles the sacred and profane, visit these two sites to see the famed “Capuzzelle” first hand. Here you will be able to view skulls that were once objects of devotion and worship to many Neapolitans, decorated with flowers and jewels. Over the centuries, the most famous Capuzzelle were given names and personal histories (which may or may not coincide with their true life stories), and many were also attributed specific talismanic or supernatural powers. 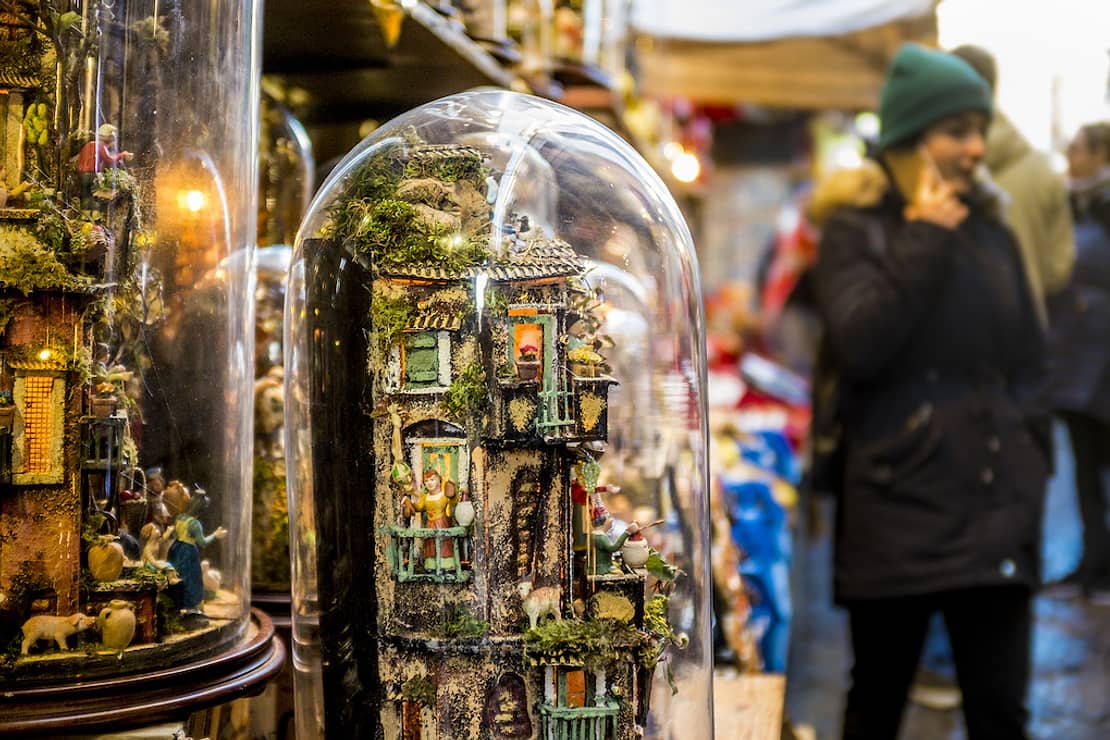 Though it doesn't exactly have a polar climate, Naples is a very Christmas-centered city all year long. The famous artisan workshops that produce handmade nativity scenes in the historic center are fascinating to visit even in the depths of summer and are guaranteed to delight visitors of all ages.

The best place to admire traditional Neapolitan nativity scenes - and even take home a figurine or full set as a souvenir - is Vicolo di San Gregorio Armeno, lined with workshops and stands. The nearby neighborhood is also worth a visit, thick with artisan shops, historic churches and palaces, and traditional pizzerias, restaurants, and street food stands.

An insider tip: avoid visiting the shops along Vicolo di San Gregorio Armeno in December, when the lane can get so crowded with Christmas shoppers that it gets difficult to walk and browse.

If you have fallen in love with Neapolitan nativity scenes and are visiting outside of the holiday season, you can see a number of them all year long in churches across the city and in the Charterhouse and Museum of San Martino, home to the historic Cuciniello and Ricciardi Presepi.

7. Enjoy an Authentic Neapolitan Pizza on Via Caracciolo 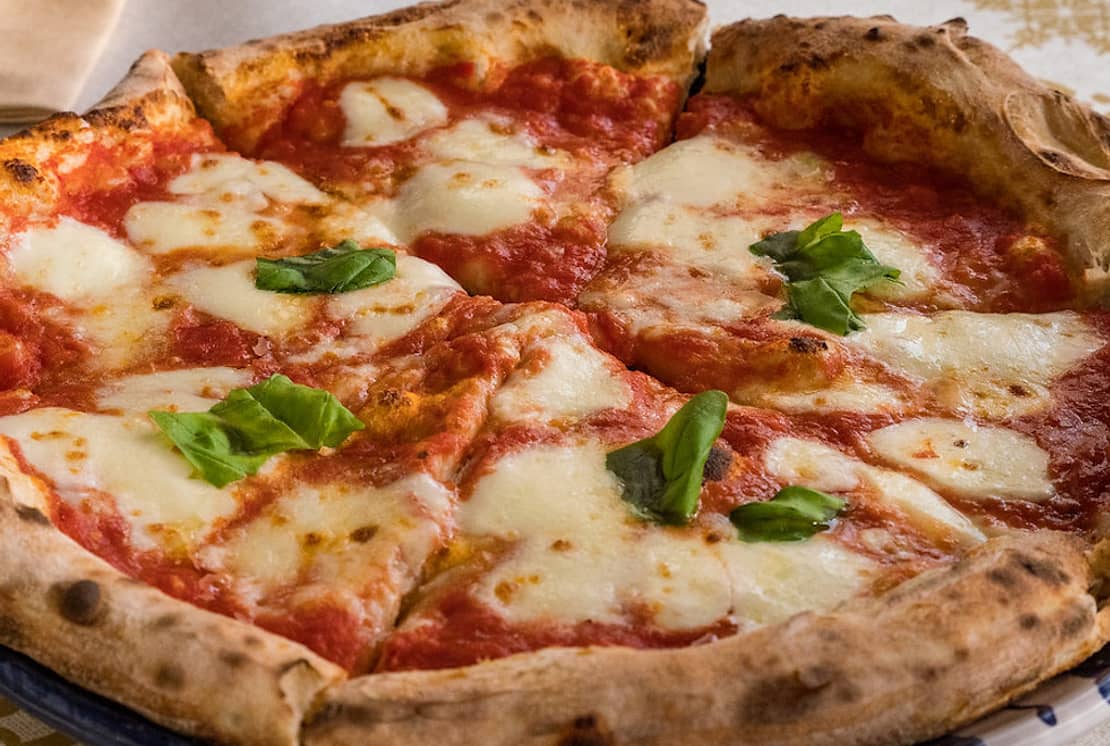 There is no Naples without pizza and no pizza without Naples! But local dishes don't end at the pizza oven...be sure to try other Neapolitan delights like sfogliatelle and babà al rhum pastries, spaghetti con le vongole (clams), fritto di paranza (paper cones of fried seafood) and much more. Neapolitan cuisine is famous worldwide, though pizza remains its uncontested culinary masterpiece.

The seafront promenade is perhaps the most scenic spot in the city to enjoy an authentic pizza or other traditional dishes with breathtaking views of the Castel dell'Ovo, Posillipo, Capri, and the whole of the Bay of Naples as your backdrop.

Another ideal spot to enjoy a true pizza napoletana is the historic center, thick with traditional pizzerias and restaurants. Along Via dei Tribunali you'll find some of the most famous and popular pizzerias in the city, but keep in mind that they are very busy in the summer and on weekends, so be sure to book a table in advance.

After dinner overlooking the sea, you can cap off your evening with a stroll along the pedestrian only promenade to the pretty Mergellina marina.

See our guide to the best pizza in Naples

8. Journey Back in Time at the Archaeological Museum 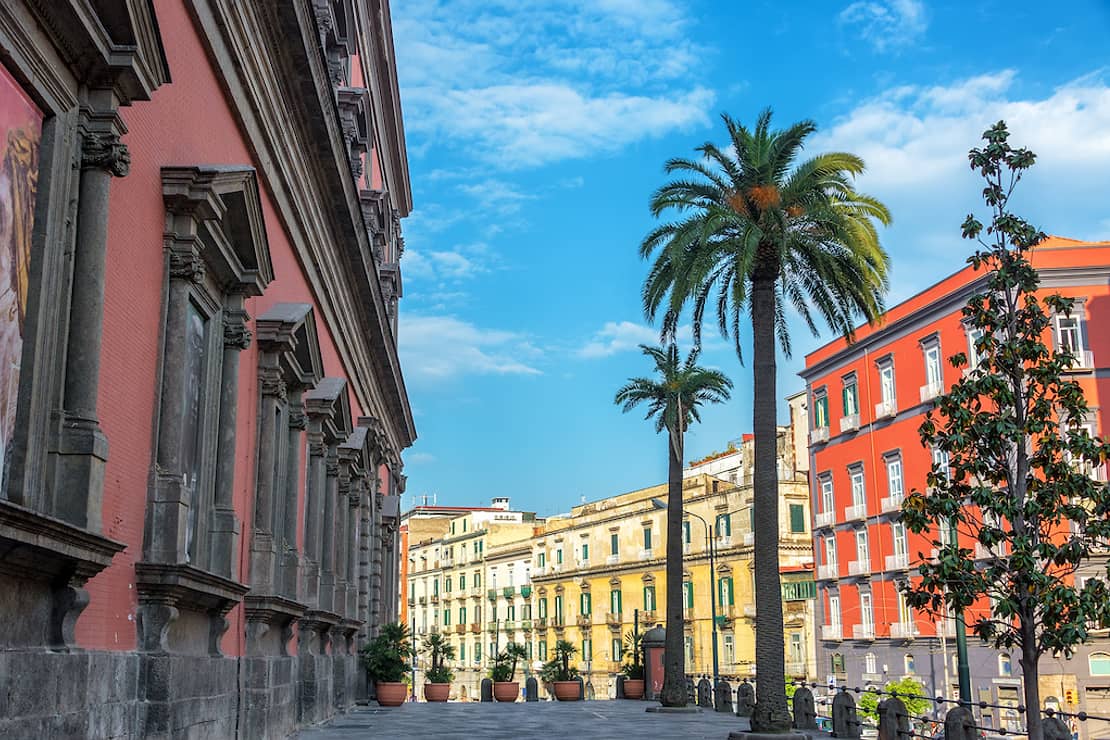 Even if you aren't an ancient history buff, a visit to the National Archaeological Museum in the historic center is definitely one of the top 10 sights in Naples to put on your must-see list. The museum is home to one of the most important archaeological collections in the world, but also frequently hosts temporary photography and contemporary art exhibitions. The imposing building where the Archaeological Museum is housed is worth a visit in its own right.

If you don't have much time to dedicate to the museum, focus on the Ancient Egypt collection (don't skip the mummies!), second in Italy only to the Egyptian Museum in Turin. From there, move on the halls where art and artifacts unearthed in the ruins of Pompeii are displayed, including the somewhat risque “Gabinetto segreto”, or "Secret Cabinet".

Tip: book skip-the-line tickets in advance online to avoid a delay at the entrance. Once you've ended your visit of the museum, take a stroll to the nearby Piazza Dante, where you can browse the bookseller stands in Via Port'Alba.

9. Dig Beneath the Surface 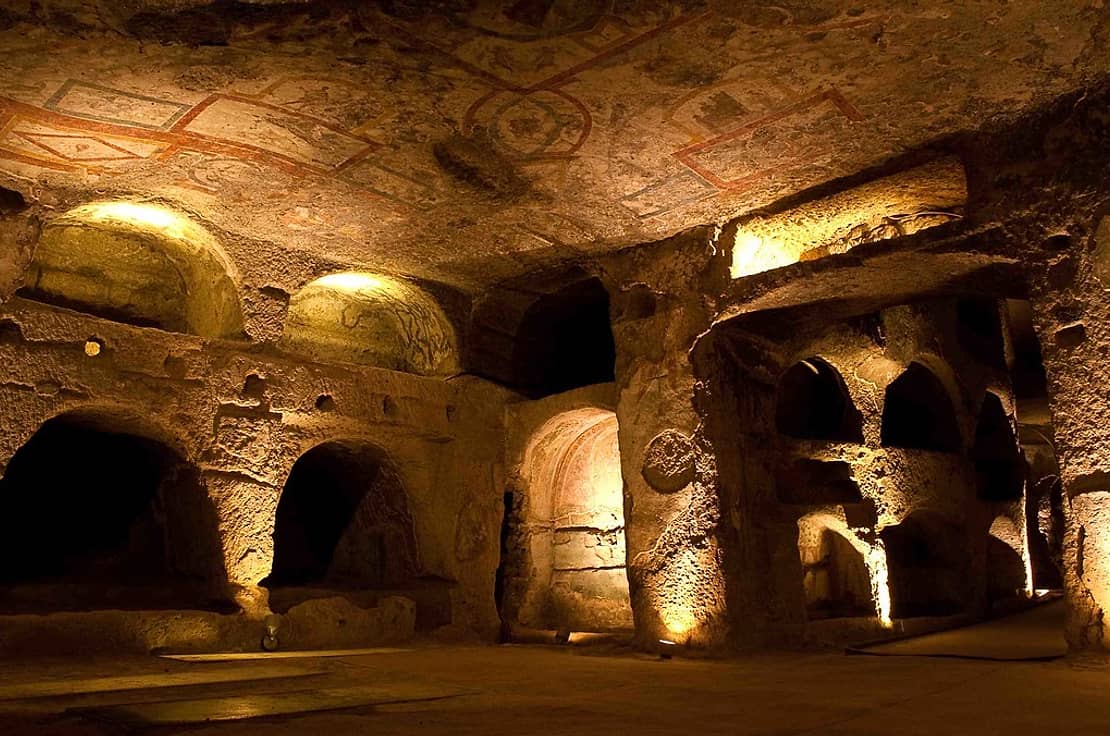 You can't say you've seen Naples until you've taken a look below the modern city! Head underground for a first-hand look at its long history and hidden ruins.

The most famous underground sight in Naples is Naples Underground (Napoli Sotterranea) beneath the historic center. The entrance is on Via San Gaetano, a cross street of Via dei Tribunali and the tour beneath the city takes about an hour and includes ruins dating from ancient Rome and bomb shelters used by locals during the Second World War.

There are a number of underground sites to tour in Naples, including burial sites dating from Ancient Greece in the Vergini - Sanità district, the Galleria Borbonica, and the Catacombs of San Gennaro and San Gaudioso.

10. Be Dazzled by the Veiled Christ 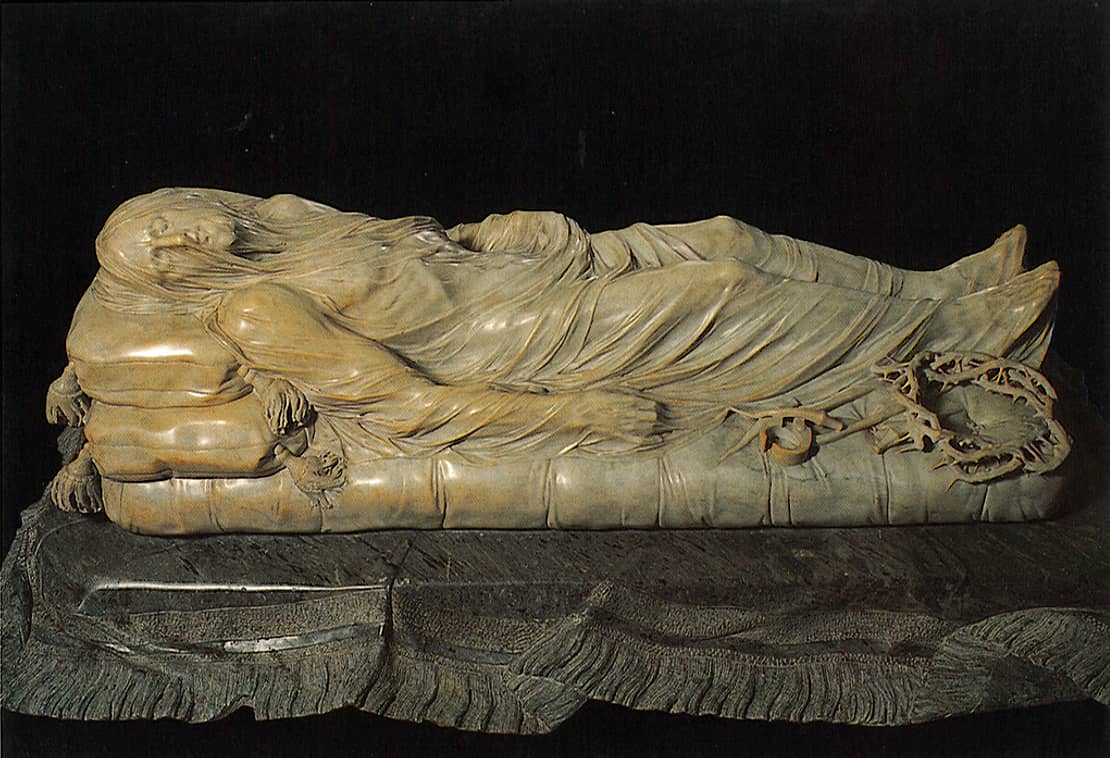 Last but not least on our list of must-sees in Naples is the incredible Sansevero Chapel, where you will surely stare in wonder at the famed Veiled Christ. This marble sculpture dating from the 1700s is one of the most realistic in the history of art, with a veil covering the body of the crucified Christ that is so finely rendered that it seems made of cloth.

According to popular legend - fueled by the Prince of Sansevero's fame as an alchemist, who commissioned the Veiled Christ - the veil covering the body of Christ is actually made of cloth that was transformed into marble by a mysterious alchemic reaction. The mysterious “anatomic models” displayed below the Sansevero Chapel are also wrapped in layers of myth and legend, lending further veracity to claims about the statue above.

We suggest combining a visit to the Sansevero Chapel with a walking tour of the historic center! Purchase a combined experience here

The Best Time of Year to Visit Naples

The best months of the year to explore Bella Napoli