Naples is a sprawling city, but the historic center that is home to the lion's share of its sights and monuments is relatively compact and can be explored on foot. The best way to get around Naples as a tourist is by combining walking with the metro (the underground subway system), especially line 1, to cover longer distances.

Is It Safe To Walk Around Naples?

Absolutely! The petty crime rate in Naples is actually lower than the most other major Italian cities, but many people consider Naples a dangerous metropolis. Walking through the historic center of Naples is no more or less risky than walking through the downtown area of any European city.

There has been a sharp rise in tourism in Naples over the past few years, and even neighborhoods that were once known as hotbeds of pickpocketing and other crime like the Quartieri Spagnoli are now thick with B&Bs, restaurants, cafés, and other businesses serving locals and visitors. Use the normal precautions that you would in any large city and you should not have any problems. Here are some tips:

Keep these tips in mind and enjoy your time in Naples hassle-free!

Getting to the City Center from the Airport 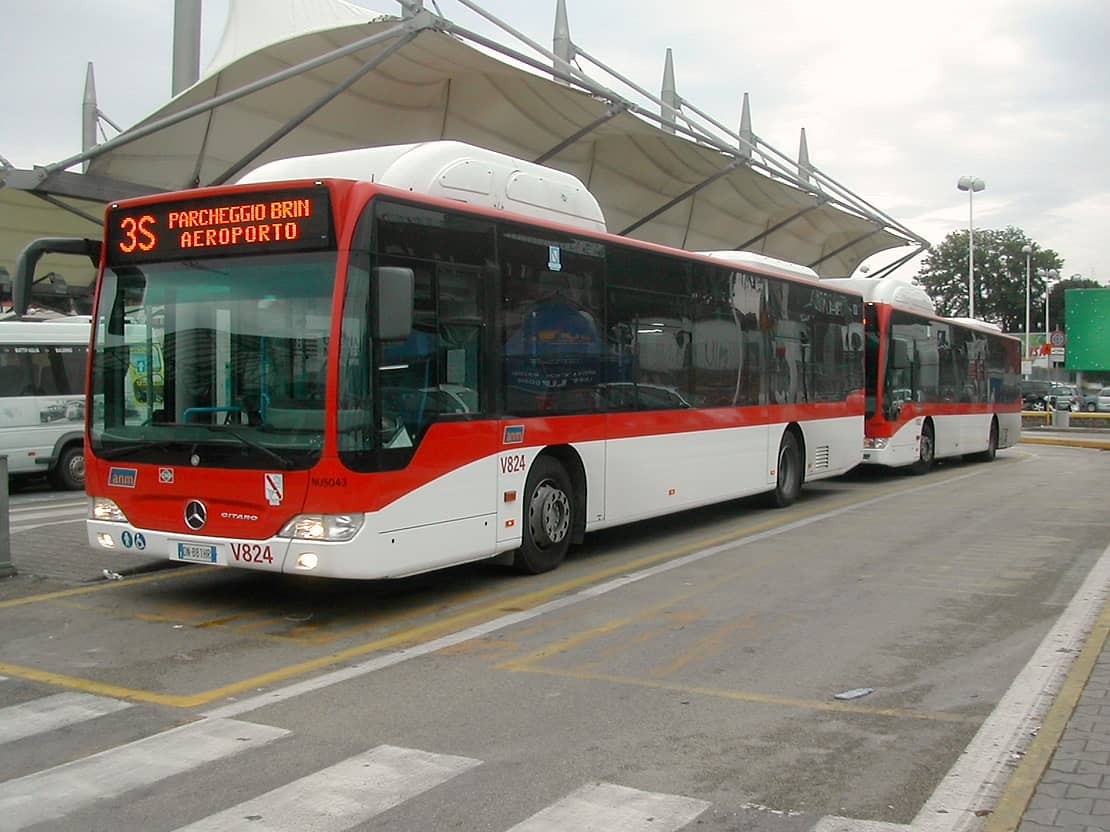 Naples has one airport: Napoli Capodichino. The airport is about 20 minutes by car from downtown Naples, but the metro does not run all the way to the airport. You must take a taxi or the “Alibus” airport shuttle to get between the city and the airport.

Taking a Taxi from the Airport to Naples

The taxi stand is at the arrivals exit at the airport; licensed taxis are parked in a row and are white. Do not take a taxi from those who solicit business from inside the airport terminal as they are not licensed taxi drivers. Once you are on board, request the fixed airport fare immediately; the fixed fare for the city center should be between EUR 18 and EUR 25, depending upon your final destination. The taxi fares are displayed on the front seat back, so you can check the prices.

Is There Uber in Naples, Italy?

Uber is active in Naples, but there are also many car services (known as NCCs, or rental with driver). These car services generally have to be booked at least a day in advance and are not an on-call service. We suggest using a car service for longer drives, for example from Naples to Sorrento, because the rates are lower by distance than a taxi, the vehicles are more comfortable, and drivers offer extra services like airport pick-up and assistance with bags.
Book a private transfer

Taking the Alibus Airport Shuttle from Capodichino to Downtown Naples

Alibus is the shuttle bus service that runs between the airport and Piazza Garibaldi and the port in central Naples.
A ticket costs EUR 5 and can be purchased online, on board or at the info point in the arrivals area of the airport.

Both the train station and the port are currently undergoing construction work, so the bus stops may be moved. If you are not sure where to get on, ask at a nearby bar as they are always updated on where the stop is located. In high season, give yourself ample time to catch the bus from the city center to the station, especially if you are getting on at Piazza Garibaldi; buses often arrive full and you may have to wait for the next one to find a seat.

Getting Around Naples on Foot

You can easily get around the center of Naples on foot. Many of the roads in Naples' old town are closed to traffic, so walking through the historic streets is a pleasure.

Sights you can visit on foot, without taking the metro, taxi, or bus:

You can reach any of these sights on foot from the Piazza Garibaldi train station (Napoli Centrale) in less than 30 minutes, but we suggest taking Metro line 1 that will get you to Via Toledo and Piazza Plebiscito ( Municipio or Toledo stop) in just minutes and begin exploring from there to avoid getting footsore.

Other neighborhoods, including Vomero, Posilippo, and Mergellina, can be reached via public transportation.

One Day in Naples

Getting Around with the Metro (Subway) in Naples 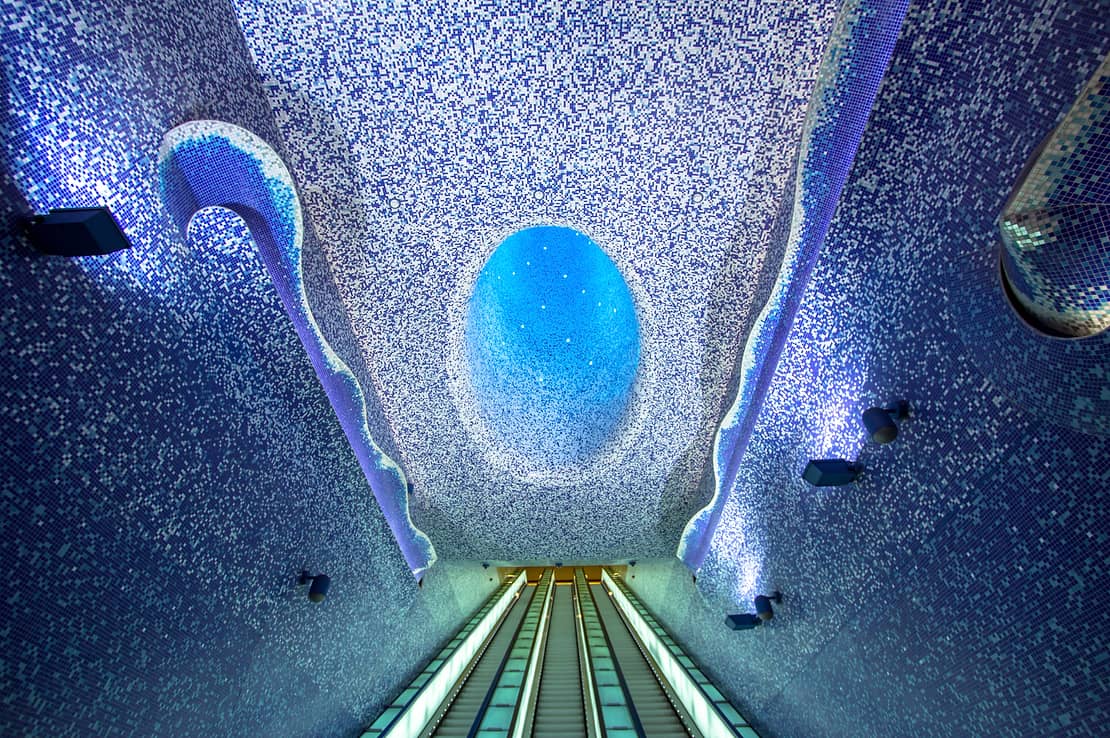 There are two metro lines in Naples: line 1 and line 2. Line 1 is the newer and faster line.

Line 1 is known as the “Metropolitana dell’arte”, or art subway, as the stations have been decorated by contemporary artists; the Toledo station is perhaps the most striking. Though the stations are modern, the service itself leaves something to be desired as trains only run about every 10 minutes and are very crowded at rush hour.

The subway line 1 (Metropolitana Linea 1) in Naples runs from Piazza Garibaldi (the Napoli Centrale train station) to Piscinola, crossing the entire historic center and the hilly Vomero neighborhood. Trains run from 6:20AM to 11PM; on Saturdays, trains run until 1AM.

Tickets for metro line 1 can be used on all ANM transportation, including buses and trams.

Line 2 was once the only underground metro in Naples and, as opposed to Line 1, uses rail cars. The route runs between Pozzuoli and San Giovanni a Teduccio and is used primarily to reach the Flegrea or Piazza Amedeo (Via dei Mille and Corso Vittorio Emanuele) areas. Trains run every 8 minutes from 5:20AM to 11:20PM. Line 2 and Line 1 cross at Piazza Garibaldi and Piazza Cavour.

The Cumana is a local rail line that runs between downtown Naples and a number of neighborhoods and towns in the outlying Phlegraean Fields. This is where the nearest beaches are located, which can be quite crowded in summer.

The terminal in downtown Naples is the Montesanto station in the Pignasecca neighborhood, while the terminal in the Phlegraean Fields is Torregaveta. It takes about 40 minutes to ride the rail line from beginning to end, and ticket prices vary according to the length of ride; it costs EUR 2.60 to reach Torregaveta from Naples. 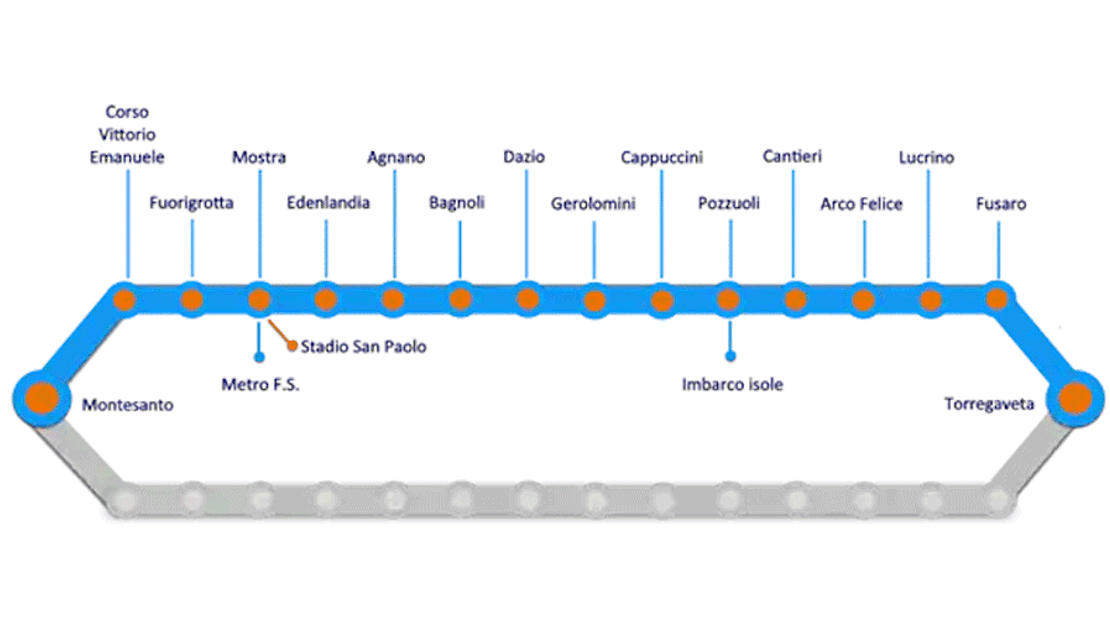 Taking the Funicular in Naples

The funicular is a very common way of getting around Naples between the areas at sea level and the neighborhoods in the hills above Naples. There are four historic funiculars in the city:

Funicolare centrale: between Via Toledo in the center and the Vomero neighborhood.

Funicolare di Mergellina: between Mergellina and the Posillipo neighborhood.

Funicolare di Chiaia: the most historic funicular was built in 1889 and runs between Piazza Amedeo and the Vomero neighborhood

La funicolare di Montesanto between Montesanto and the Vomero neighborhood

Getting Around Naples by Bus or Tram

Naples has an extensive bus system that is primarily used to get between the residential, hospital, and university areas and not for the historic center. The most useful lines for visitors are:

These two trams run the length of Via Marina and are useful to get between the station and the area surrounding Piazza Municipio and Piazza dei Martiri.
You can purchase a ticket from the driver on board for EUR 1.50 or before boarding for EUR 1.10 at newspaper stands and bars that sell tickets. For additional information regarding the bus: ANM Buses Naples

Getting Around Naples by Car

We do not recommend driving in downtown Naples due to the heavy traffic in the city center, the difficulty finding parking, and the various areas that are closed to non-residents. The best option if you are arriving in Naples by car is to park at an outlying parking garage or lot and walk or use public transportation in the city center.

The most practical and inexpensive option for parking your car in Naples is to use a parking garage or lot near the highway or beltline (tangenziale) exit.

ANM parking lots are the best option for parking in Naples, which are managed by the city's public transportation department. These lots are inexpensive and are near the major metro and bus stops.

Parcheggio Brin: on Via Marina not far from the highway exit. A number of bus lines and tram line 4 pass near here, and you can purchase tickets at the automatic ticket machine. There are about 800 parking spaces and the daily rate is EUR 8.

Colli Aminei: at the beltline (tangenziale) exit near the Colli Aminei stop on metro line 1 that connects to the city center.

Policlinico: at the beltline (tangenziale) exit near the Policlinico stop on metro line 1. The daily rate is about EUR 6.

Other conveniently central parking options are Piazza Garibaldi (next to the train station) and beneath the Maschio Angioino in Piazza Municipio. These parking options are more expensive, so best for those who are coming to Naples for a day trip and want to park downtown.

The red Sightseeing buses are a great way to visit a city for the first time. We recommend catching the bus as soon as you arrive to get your bearings and enjoy an overview of the city’s highlights that you may want to visit at your own pace later during your stay. With the hop-on-hop-off ticket, you are free to get off at any or all of the many stops along the route to visit an attraction or sight, and then catch the next passing bus to continue along the route. This is also an ideal solution for those visiting Naples for just one day who want to take in the most iconic monuments without wasting time on foot or with public transportation to get around.
Bus Hop-On Hop Off Naples - Info, schedule and routes

Do you need a car in Naples Italy?

Naples is a city that is best explored on foot. Its winding streets and alleyways can be confusing to navigate, and parking can be difficult to find. However, the city is well served by public transport, with an efficient bus and metro system that can get you around without any hassle. If you do decide to drive, be prepared for traffic and be sure to park in a safe area. Overall, using public transport is the best way to get around Naples (Amalfi Coast, Sorrentine Peninsula, and Pompeii ruins).

Is Naples easy to walk around?

Naples is a lively and vibrant city, with plenty to see and do. It's also an incrediblywalkable city - in fact, many visitors find that they can easily get around on foot. The city centre is relatively small, and the streets are often quite narrow. This means that you can quickly get from one place to another without having to use public transport. Naples is also relatively flat, which makes it even easier to walk around. Of course, as with any city, it is always important to be aware of your surroundings and take precautions against pickpockets and other petty crimes. With a little common sense, you can have a safe and enjoyable visit to Naples.