Naples Underground (Napoli Sotterranea) is one of the most popular attractions in Italy’s southern city of Naples. This underground route that includes everything from ancient Roman ruins and aqueducts to caverns used as bomb shelters during World War II provides a fascinating glimpse into the history of Naples that is compelling for both adults and younger travelers. The route is easily accessible and can be enjoyed by the entire family and even travelers who suffer from claustrophobia. Private tours of Naples Underground and underground tours in languages other than English and Italian can also be booked.

What is Naples Underground?

Napoli Sotterranea - The Underground Tour from Via dei Tribunali

The Napoli Sotterranea (Underground Naples) guided tour begins at street level in Piazza San Gaetano, a cross street of Via dei Tribunali, in the heart of Naples' historic center (once known as Neapolis). At the entrance, there are 136 low and easy-to-navigate steps that take you 40 meters below the modern city. Here, you can admire caverns carved into the soft tuff stone in the fourth century and first used as cisterns for water; in the mid-20th century, these same rooms protected locals as air-raid shelters. The tour then passes the earthquake monitoring station to visit a number of ancient ruins, including burial catacombs. The walking tour takes about an hour to complete and the spaces are all quite large. There is one tight passage of underground tunnels that is about 10 meters in length, is lit only by candles, and leads to a cistern (once part of the Roman aqueduct system); visiting this portion of the route is optional and those who would rather avoid this enclosed space can sit it out on a nearby bench.

After the initial section, the tour continues with a visit to an ancient Greek-Roman theater. The Greco-Roman theater is accessed through a “secret hatch” hidden beneath the bed of a ground-floor apartment (traditional Neapolitan “basso” apartments) and is the remains of a performance space in the ancient city dating from Emperor Nero, as well as a number of canals dating from the time of the Bourbon reign and decorated with delightful majolica ceramics.

At the end of the tour, you can stop at the War Museum (Museo della Guerra) to admire documents and other artifacts from the Second World War.

The Napoli Sotterranea tour beginning point is located in the historic center of the city where vehicular traffic is limited, so can only be reached on foot. The nearest metro station is Dante one line 1 (direction Piscinola).
If you are arriving by car, park at the Duomo, Piazza Cavour, or Corso Umberto parking garages, which are all about a 10-minute walk from the entrance of Napoli Sotteranea.

The route is not challenging and anyone can visit. If you are traveling with young children, opt for a baby carrier or backpack rather than a stroller as there are a number of steps; there is a baby stroller (pushchair) parking area at the entrance. The steps are wide, have a handrail, and are easy to navigate even for those who have to be cautious about stairs.
The underground spaces are all quite large and are suitable even for visitors who suffer from claustrophobia. Visitors can decide to leave the tour at any point and return to ground level if they decide that they are not comfortable remaining underground.
The temperatures inside Naples Underground remain quite cool all year round, so bring a light jacket or sweater in the summer months. 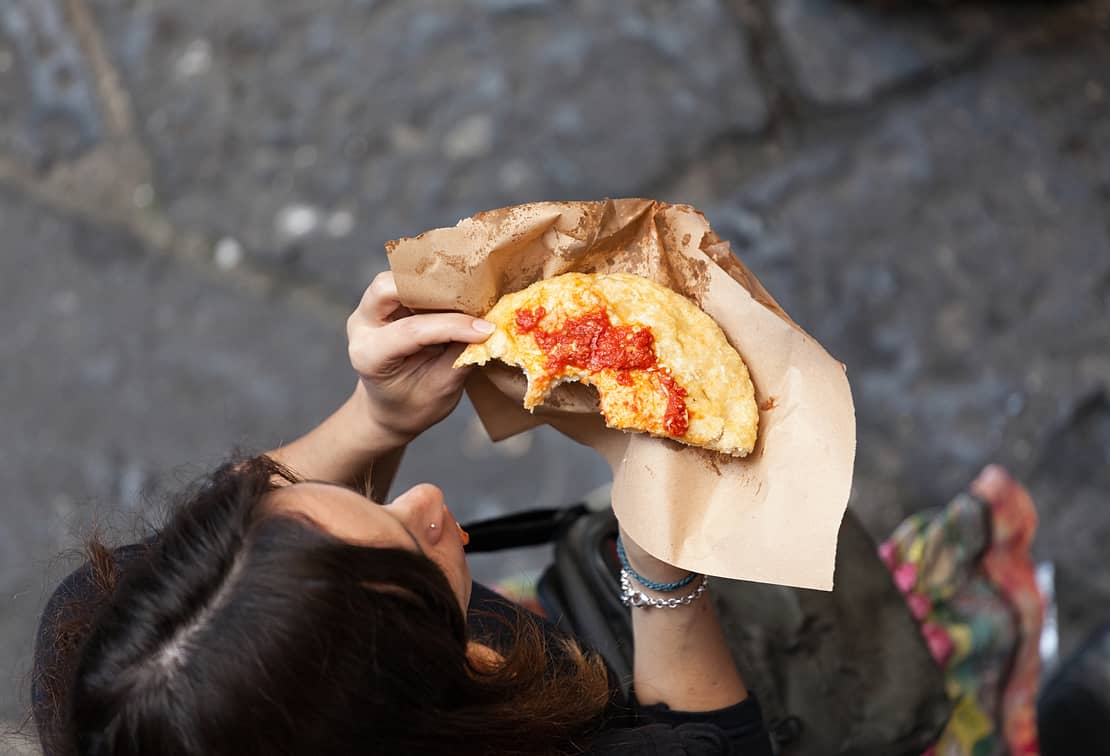 Naples Underground is located in the heart of the old town and there are endless options for dining nearby. The most famous pizzerias in the city are just steps away, including names like Sorbillo and Di Matteo. Keep in mind that there are often long lines at these popular spots to get a table. Even if you don’t want to wait in line at one of the A-list pizza restaurants, you can opt for any pizzeria in the area and have a great pie. If you’d rather try traditional Neapolitan specialties like pasta and main courses, try Da Carmine and Campagnola. Otherwise, walk up into the Spanish Quarter for other landmark eateries like Nennella. For a satisfying bite on the go, stop at one of the many street food stands and order a "cuoppo" (paper cone of deep-fried seafood) or other snack to nibble while you explore.
Street Food in Naples

If you enjoyed Naples Underground and would like to visit something similar, explore the Bourbon Tunnel, the Catacombs of San Gennaro, and the Catacombs of San Gaudioso. This is another “Naples Underground” attraction that begins beneath Piazza Trieste e Trento, next to Piazza Plebiscito and opposite the Royal Palace. Of course, you can also visit the ruins of Pompeii.

Other Underground Sites in Naples

This underground site, which (somewhat confusingly), shares the same name as the main Naples Underground discussed above, begins from Piazza Trieste e Trento next to the central Piazza Plebiscito and just opposite the Royal Palace. The route snakes its way through a warren of tunnels directly beneath the heart of the centro storico, the Quartieri Spagnoli. The site is appropriate for all visitors. 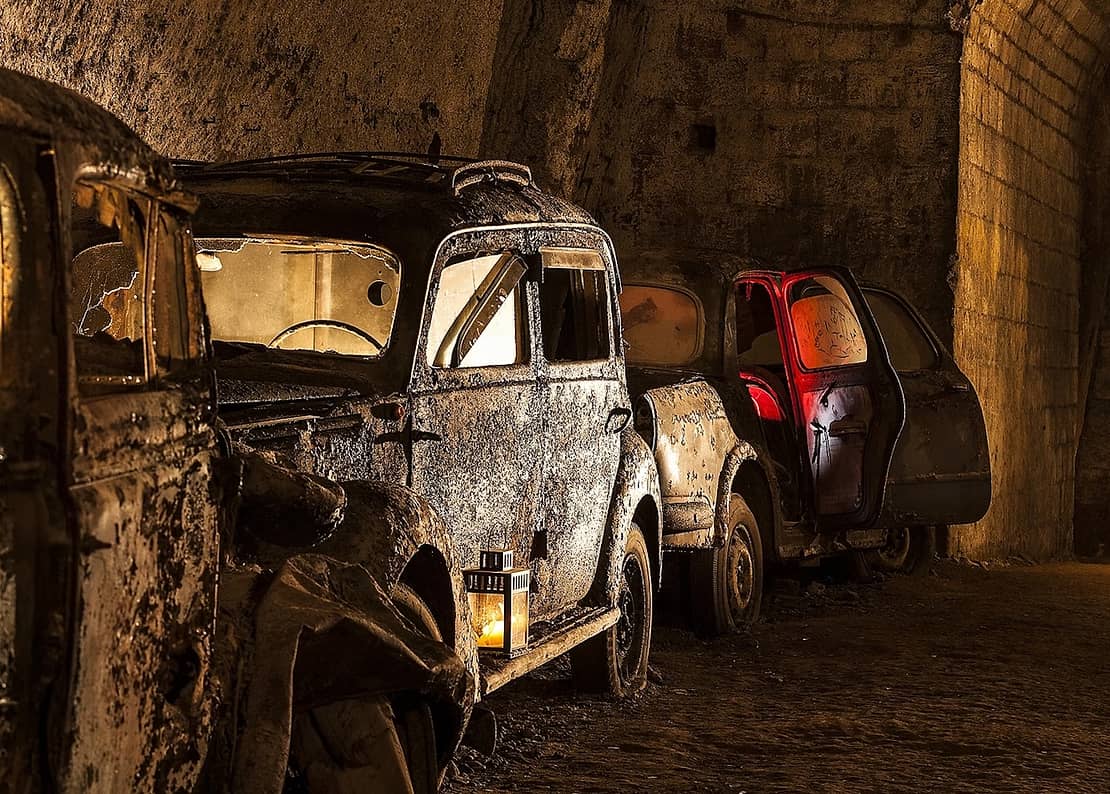 This underground site was excavated by Frederick II of Bourbon and stretches from the Royal Palace to Piazza Vittoria near the seafront; it was constructed to provide the royal family an escape route in case of an uprising. There are a number of visitor routes to choose from, from the classic option that includes a stretch on a charming raft to the more adventurous option that includes a spelunking portion. There are different entrances depending on the route you choose: the Domenico Morelli parking area, Via Monte di Dio, or Vico del Grottone near Piazza Plebiscito.
Tickets for the Bourbon Gallery (Galleria Borbonica)

Beneath the spectacular Basilica of San Lorenzo and just steps from San Gregorio Armeno hide remains of the Greek and Roman city of Neapolis, the first inhabited settlement that grew to become present-day Naples. Venture underground to walk along an ancient road lined with the remains of shops like a bakery and butcher. The entrance is located in Piazza San Gaetano 316, a few steps from the classic route above.
Visit the Complex of San Lorenzo Maggiore

The Catacombs of San Gennaro

Set in the Capodimonte neighborhood, these catacombs are named after the patron saint San Gennaro, who was buried here until his remains were moved to the city's cathedral.
Visit the Catacombs of San Gennaro

The Catacombs of San Gaudioso

In the Sanità district, the underground areas beneath the Church of Santa Maria della Sanità house the remains of thousands of deceased Neapolitans.
Visit the Catacombs of San Gaudioso

You will immediately spot this church set along Via dei Tribunali by the skulls decorating the entrance. This was once the most important hub of the Neapolitan tradition of "anime pezzentelle", or souls trapped in Purgatory who needed prayers from the living to release them into paradise. You can see the skull of "Lucia", covered in a bridal veil and decorated with flowers; according to legend, she died shortly before her wedding day.
The official Santa Maria delle Anime del Purgatorio ad Arco website 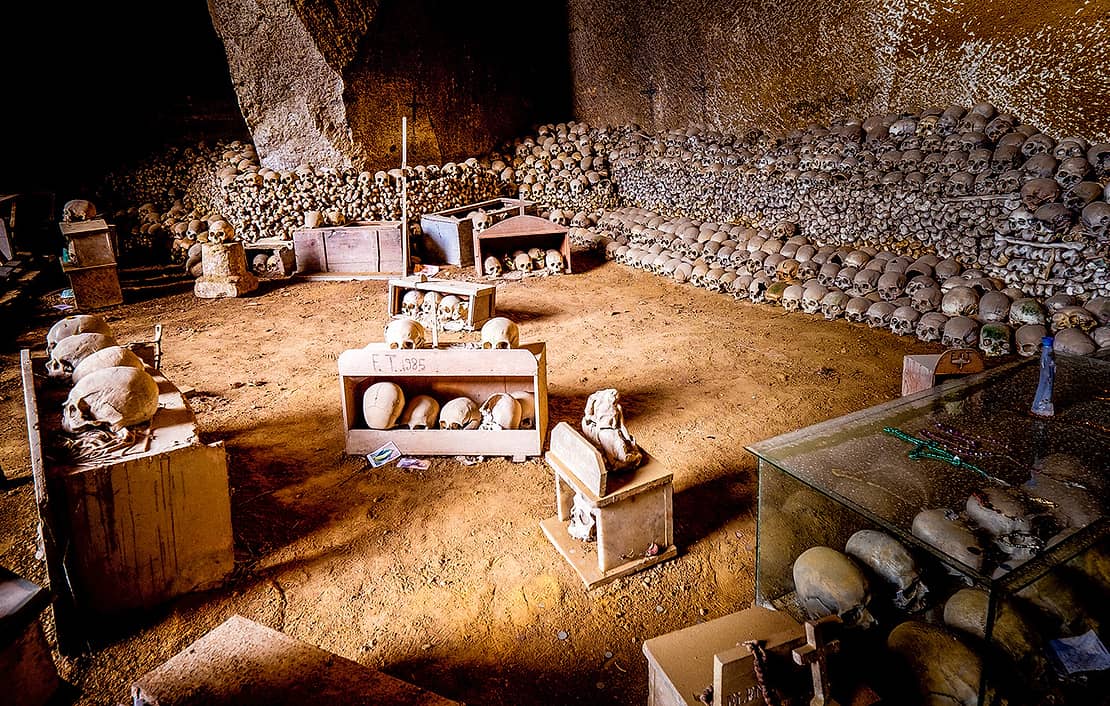 One of the most recent catacombs this burial site was founded in the 16th century as a mass grave for victims of the plague and became used as a paupers' grave over the following centuries. Today it holds almost 40,000 skulls.
The official Fontanelle Cemetery website 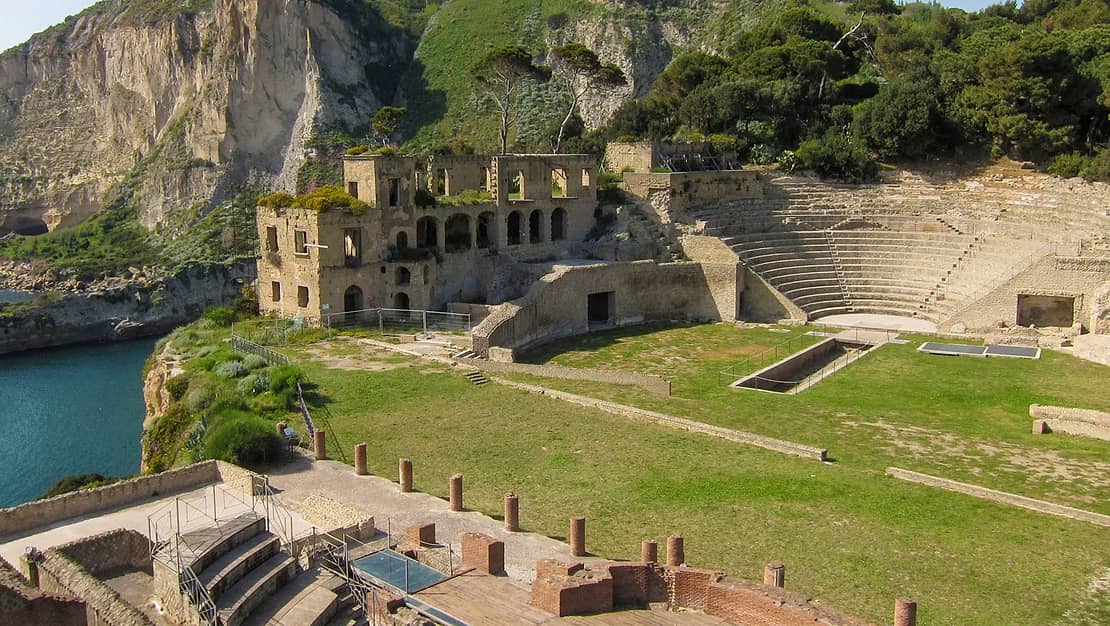 This ancient site in the Posillipo neighborhood contains a number of Roman ruins, including a theater and aqueduct. Visitors can access the site by passing through the Grotta di Seiano, a network of underground tunnels that were once used as part of the city's drainage system. The site is particularly spectacular due to the views over the Bay of Trentaremi and is a fascinating off-the-beaten-path site far from the tourist crowds.
The official archaeological park website (Italian only)

How many different Naples Underground routes are there?

There are a number of underground routes in Naples that include tunnels, galleries, catacombs, and burial grounds. The most important is the Naples Underground cobered above, which begins near Via dei Tribunali. The second, known as "La Napoli Sotteranea", begins on Vico Sant'Anna near Piazza Trieste e Trento.
Another interesting underground site is the Bourbon Tunnel (also known as the Bourbon Gallery), which has three entrances: Vico del Grottone (in Piazza Plebiscito), Via Monte di Dio, and near the D. Morelli parking area. There are a number of different routes inside the tunnel, from classic walking tours to speleological excursions for the more adventurous visitor.

How much to Naples Underground tickets cost?

Tickets to the Naples Underground cost €10; children under five years old enter free and there are discounts for visitors younger than 18. Other underground experiences cost between €10 and €20, depending on the length and type of tour (spelunking excursions generally cost more since they include specialized equipment).

Can I visit Naples Underground if I’m claustrophobic?

For the tour that begins from Piazza San Gaetano, there is only one portion of the route that is very tight and visitors can sit that portion out in a more spacious cavern. That said, the entire site is underground so can be a challenge despite the wide tunnels and chambers.

Do I need to book tickets to Naples Underground in advance?

How long does the underground tour last?

t takes about an hour to complete the Naples Underground tour

The treasure of the Sansevero Chapel

The Capodimonte palace and grounds

The most famous catacombs in Naples

Art and artifacts recovered from Pompeii and Herculaneum

The most interactive museum in Naples!