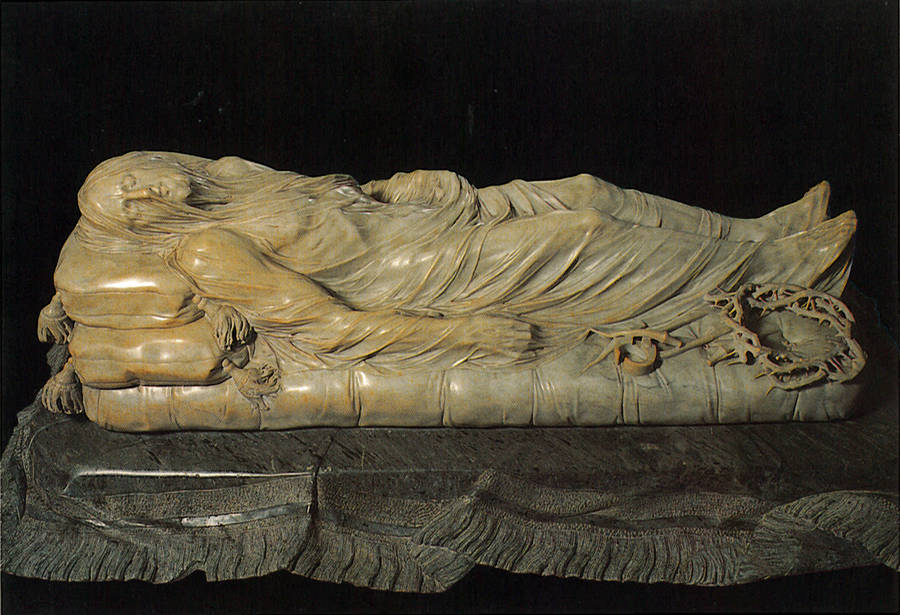 The Veiled Christ (Cristo Velato) is one of the most famous works of art in Naples. Carved in the late 1700s by Giuseppe Sanmartino, this glorious statue is the centerpiece of the Sansevero Chapel (Cappella Sansevero) tucked in the warren of lanes in Naples' bustling historic center. The statue is an astoundingly life-like rendering of the body of Christ covered by a transparent veil, created from a single block of white marble. The paper-thin veil covering Christ's body is so painstakingly done that its seems to be made of fabric rather than stone, and is so delicately carved that light can pass through its drapery in several places. This breathtaking work of sculpture, famous across the globe for its exacting details, was created by commission of Raimondo di Sangro, Prince of Sansevero, an intellectual aristocrat and patron of the arts in the 18th century.

The Prince of Sansevero was also a known alchemist, and in addition to his most famous commission, his odd experiments are another reason he has gone down in history. Legend holds that the prince somehow developed a secret "marbelizing" process to turn fabric to stone, explaining the hyper-realism of the Veiled Christ. Instead, the truth is equally surprising: it is simply a masterpiece of Baroque art, carved from a single block of marble.

In addition to the central Veiled Christ, there are a number of important sculptures decorating the interiors of Naples' Cappella Sansevero, including the Pudicizia (or Modesty) by Antonio Corradini, il Disinganno (or Disappointment) by Francesco Queirolo, as well as a beautiful original floor in Neapolitan terracotta. In the cellar of the chapel, visitors can admire the mysterious Macchine anatomiche (or Anatomical Machines), skeletons of a male and a female that represent the circulatory system in captivating detail.

It is said that the Macchine Anatomiche were created by Giuseppe Salerno, a physician from Palermo, who used a technique that remains somewhat of a mystery to this day. Unconfirmed rumors for years claimed that the detailed models were created by injecting some sort of liquid into two subjects while they were still alive, but there is no evidence to support this claim.

The price of tickets to the Cappella Sansevero is EUR 8.

There are a number of discounts for visitors:

The popularity of the Veiled Christ has skyrocketed over the past few years, and there can be a long wait to enter the chapel. Avoid visiting on weekends and during holidays to avoid the queue.

The best times to visit the Veiled Christ are early morning and midday (between noon and 2PM), when most tourists in Naples are taking a lunch break.

You can also opt to purchase skip-the-line tickets to the Veiled Christ with a EUR 2 supplement on each ticket. These priority-access tickets let you zip past the long line at the ticket window and move directly to the shorter line for those with reservations; they can be purchased directly from the Museo Cappella Sansevero website up to three months in advance. You can enter up to 15 minutes after the time reserved and printed on your ticket. We strongly recommend booking these skip-the-line tickets during holidays and in the high season summer months.

Getting to the Veiled Christ

The Veiled Christ is displayed in the very center of the Cappella Sansevero, a small Baroque chapel that is no longer consecrated but remains one of the most interesting sights in the city. The chapel is located just meters from Piazza San Domenico Maggiore and cannot be reached by car as the surrounding area is closed to most vehicular traffic. The best way to visit if you are arriving in Naples by car is to park outside the historic center and move around the city by public transportation or taxis.

If you are arriving via the highway, take the Porto exit and park at the Brin parking garage. Take bus 154 to Via Volta and get off at the Marchese Campodisola stop a short walk from the Cappella Sansevero. Otherwise, park in the garage on Via Mancini near Piazza Garibaldi.

From Piazza Garibaldi, where the Naples Centrale train station is located, you can reach the Cappella Sansevero in 30 minutes on foot (about 2 km) or take a number of different buses or metro lines:

If you are flying to Naples, take the Alibus airport shuttle to Piazza Municipio and walk or take metro line 1 (Dante stop).

For those arriving by ferry or cruise ship, the best option is metro line 1 from Piazza Municipio to the Dante stop or walking (about 40 minutes).

Dining Near the Veiled Christ

The historic center of Naples is thick with traditional pizzerias and restaurants, as well as pastry shops and street food stands...you'll have no trouble finding something to eat before or after visiting the Veiled Christ.
If you are craving pizza, instead of the famous pizzerias that can be crowded and have long wait times, head to Donna Sofia on Via dei Tribunali 89. The restaurant 120 Grammi on Via Mezzocannone is famous for its spaghetti served with a variety of sauces and also available to take away in a custom box. To sample the city's famed fried street food, stop at Friggitoria Verace on Via San Pietro a Maiella.
Another highly recommended restaurant in the area is Tandem, known for its traditional ragù served on a variety of pastas or in a bowl perfect for dipping bread.

Book your transfer online Private Transfers Request prices and information to get around Naples and the surrounding area safely and comfortably.
Experiences and Tours Tours and Day Trips to Naples, Capri, and Positano More than 24.000+ tours booked online.
Plan your perfect day in Naples!